Planning Your Trip to Heidelberg

There’s a famous song about losing one’s heart in Heidelberg. Check out this blog post to see why and what you should do when you plan your trip.

“Ich habe mein Herz in Heidelberg verloren” as the old song goes (translation: I lost my heart in Heidelberg) . I studied here from August 2011-August 2012 and as corny as it sounds… really did lose my heart here. With the beautiful architecture, castle, and history, there is so much to explore. Below is my list of things you need to check out if you decide to make it a stop when you adventure over to Germany. I’ve divided it into three main sections (to make it easier for you to plan):

This is the most well known site in Heidelberg and is kept in its current condition (since that’s how tourists recognize it).  The castle has been repeatedly been attacked and even struck by lightning.

So what can you do when you visit the castle?

The best time to see the castle is during the Schlossbeleuchtung (being held on June 2nd, July 14th, and September 1st in 2018).  The castle is lit through Bengali flares creating a magical view from afar. Later there are fireworks over the Neckar (which is the river that runs through in Heidelberg)

A train will take you all the way up to the top or you can hike. Koenigstuhl offers arguably the best view of the city. Just in case being 1,700 feet up isn’t enough of a reason to go, there is also a falcon breeding station and a fairy tale themed park for children.

The Altstadt (or the Old City)

Please note that as you enter the old city that most of Heidelberg had been burnt to the ground. This has actually given Heidelberg a very unique look. The roads are all dating back to the middle ages, while most of the houses date back to the Baroque time period. I’d recommend booking a tour, since there is so much history here

In the days before Bismark, the university operated as its own system. There was however, a door (which is now locked) to connect the prison to the old university so that students could still attend school.

The student prison became a rite of passage especially among fraternity brothers. You can still see their colors and graffiti on the wall. (Also – these fraternities still exist. On the way to the castle, look for the big houses with flags!)

The silhouettes with the hats were done by the fraternity members who stayed here.

This included in your ticket to the Unviersity Prison. Heidelberg University is the oldest university in Germany and one of the oldest in all of Europe.

One of the highlights of this part of the museum is the “Alte Aula” or the auditorium. Hint: Look closely around the room and see the names of famous professors lining the top. You’ll notice that Bensen, who invented the Bensen Burner, is at the back. They had forgotten to put his name in originally.

This is not the first bridge linking the sides of the Neckar. However, after all the destruction caused by fire, Prince Karl Theodor ordered the construction of this bridge in brick. Be sure to check out to take a picture with the bridge monkey of Heidelberg and to try some Heidelberg beer at Vetter’s, which is right down the road. 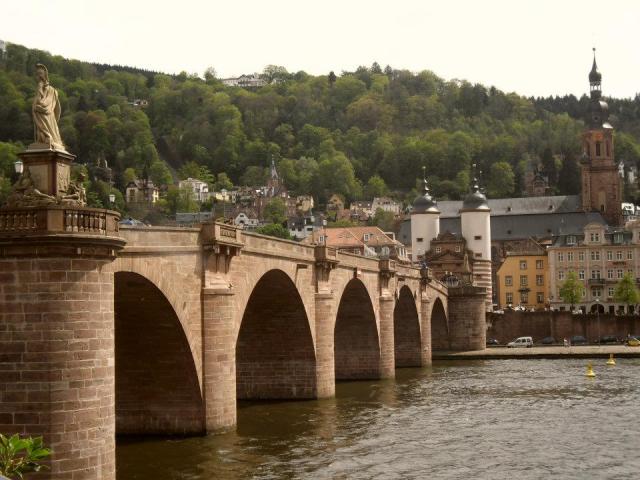 Thingstaette, Philosopher’s Way and the Monastery

Plan a full day for this, since you will be hiking. For some of the best views of the city, cross the old bridge (though there are several entrances) and embark on a journey up Philosopher’s Way. At the top, you will first see Thingstaette. This was modeled after the Greek style and was built between 1934 and 1935 by the State Labor Service and University students.

View from Philosopher’s Way in the winter time.

If you climb Thingstaette’s steps, you will come across some more ruins from a 16th century monastery ruin 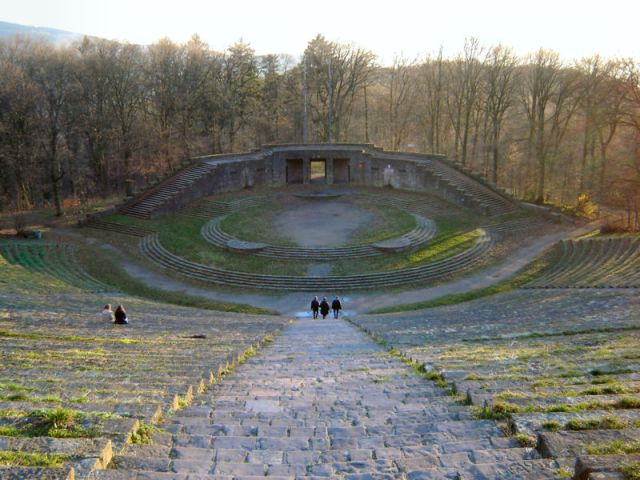 Thingstaette. Climb those steps to get to the monastery

Events: May 1st is Hexennacht (literal translation: witch night). There is a giant bonfire with thousands of people gathering at Thingstaette to drink and celebrate. If you are around, venture up and have fun with the crowds of people.

Any more places you really think people need to check out? List in the comments below:

4 thoughts on “Planning Your Trip to Heidelberg”